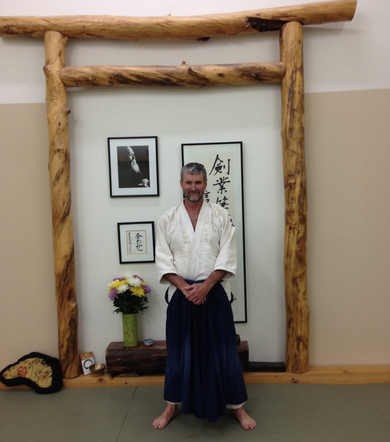 Barrett Sensei studied a variety of martial arts in his youth including Kenpo, Taijiquan, Shotokan, Shorin-Ryu Karate, and Tae Kwon Do. In 1991 he began his study of Iwama Aikido under the direction of Wolfgang Baumgartner Sensei in Reno, Nevada.

His career required he move throughout the west but whether in southern California, Tucson, Las Vegas, Nevada or Albuquerque he has continued to study a variety of aikido styles. His previous instructors include Aviv Goldsmith, Tom Rennie, Judith Robinson, Coryl Crane, Stan Pranin, Diane Deskin, and James Cornfield Senseis.

As a result for three years he drove over an hour each way to train several days a week in Santa Fe. Several years ago he decided to teach Iwama style aikido in Albuquerque through Recreational Services at the University of New Mexico. In January of 2018 he moved the program off campus to it's fomer location at 4312 Lomas Boulevard NE in Albuquerque. He currently hold a Yondan (4th degree black belt) recognized by the Aikido World Headquarters in Tokyo.

He regularly travel to seminars throughout the west and has attended ones taught by Morihiro Saito, Hans Goto, Kim Peuser, Hoa Newans, Pat Hendricks, Bill Witt, Hiroshi Ikeda, Mitsugi Saotome, and the current Doshu, Morihei Ueshiba Sensei among others. He has also served as an uchideshi, or live in student at the Founder's dojo in Iwama Japan. 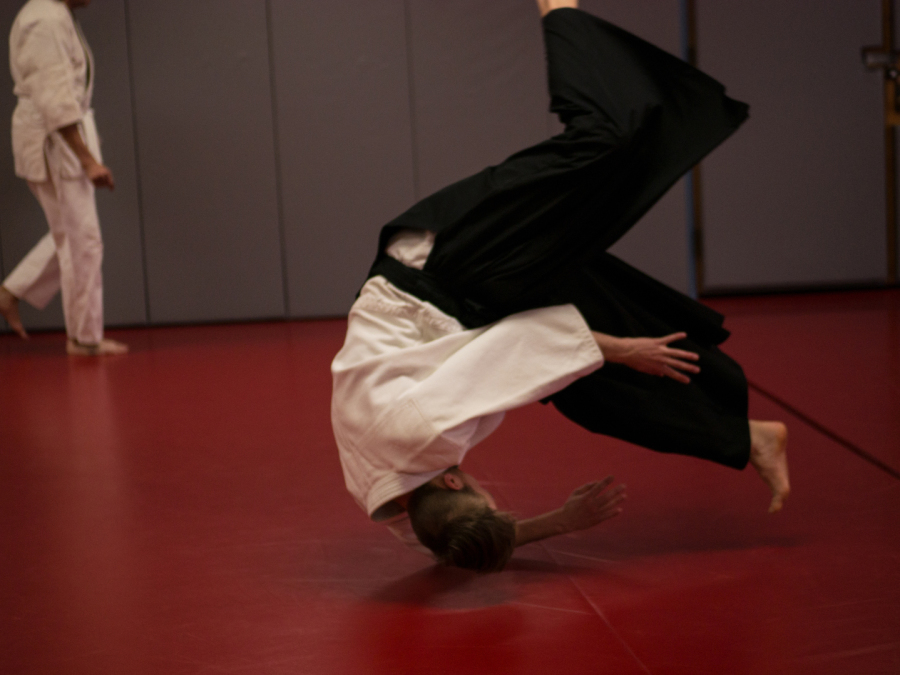 I started training at the Aikido Arts Center in Santa Fe under William Baumgartner Sensei and later Bill Smythe Sensei. I was the first student from Aikido Arts Center to receive their Shodan (1st degree black belt) after starting in the kid's program at the lowest rank (10th kyu). I helped start the Aikido Club at the Unversity of New Mexico with Paul Barrett Sensei and have gone on to teach with Duke City Dojo. Currently, I hold a Sandan (3rd degree black belt) rank. I am also an actor and writer in the Albuquerque community. 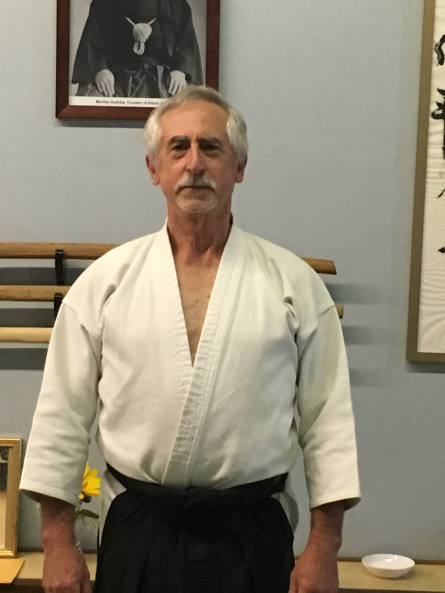 Fred Phillips, 6th Dan (Aikikai) began aikido training in 1973, attaining shodan under the instruction of Bill Lee, Jay Portnow, and Rod Kobayashi. After taking instruction from Koichi Tohei in Japan (1975-76), Fred trained under aikido and Zen master Fumio Toyoda for the next 25 years, running dojos in Texas and Oregon under Shihan Toyoda's supervision.  Subsequent to Toyoda Sensei’s passing, Phillips Sensei trained and taught in the Netherlands, Peru, Malta, Cyprus, Belgium, Egypt, South Korea, Taiwan, China, and Vietnam. Following seven years living in Korea, Taiwan and China (and enjoying further instruction under Shi-Qiang Sun Sensei in Taiwan), Fred moved to Albuquerque in 2018. He has enjoyed the hospitality and instruction at Albuquerque Iwama Aikido, and now teaches the “Aikido Advanced Topics” class there. His 2003 book on aikido and Zen principles for managers has been translated into Spanish, Korean, and Mongolian. His latest book, Learning and Teaching Aikido, was published by World Scientific in 2021. 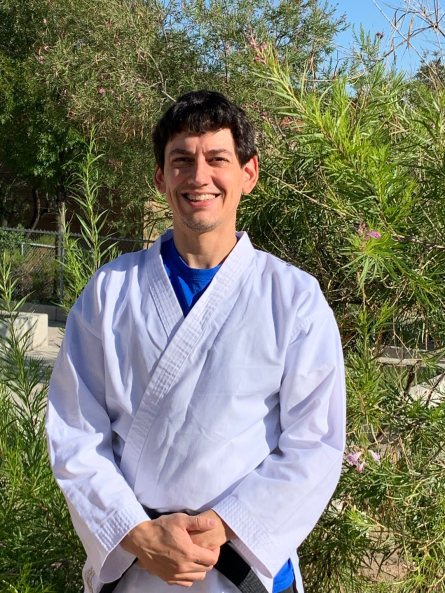 My aikido journey started in 2015, with what was then called Albuquerque Iwama Aikido at the University of New Mexico, under the leadership of Paul Barrett Sensei. I was drawn to Iwama style aikido for its emphasis on kihon technique- the philosophy that a strong foundation is necessary upon which to develop a functional understanding of aikido. When UNM closed its athletics facility for renovation, I assisted with establishing Duke City Dojo in 2018. With the guidance of Paul Barrett, Nicholas Johnson, and Charlie Stein Senseis, I achieved the rank of shodan (1st degree black belt) in April 2019. In my time training, I have had the good fortune to learn from highly accomplished aikidoka who served as uchi-deshi with Morihiro Saito Shihan, including: Shigemi Inagaki, Hans Goto, Hoa Newens, Wolfgang Baumgartner, Mark Larsen, and Dennis Watson Senseis. 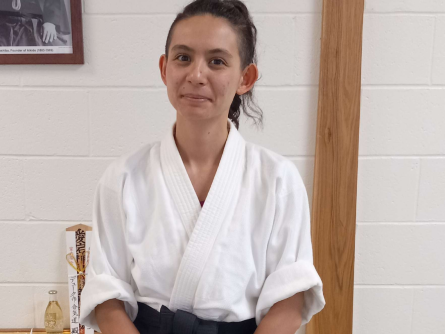 While interested in martial arts for most of her life, Paulina didn’t start practicing aikido until 2017 at the age of 26 when the fledgling Albuquerque Iwama Aikido (AIA) operated out of the works program at the University of New Mexico. She trained there with AIA for a year, with a few months spent under Mallory Graham Sensei at Seattle Aikikai during the summer of 2017. Taking 2018 off for dissertation research, Paulina returned to train with Duke City Dojo/AIA in Spring 2019. They trained there until the close of the physical dojo space in March 2020 due to the ongoing COVID-19 pandemic. However, she continued her aikido practice informally with other members of the dojo in parks around Albuquerque. Upon re-opening AIA for indoor in-person training, Paulina began substitute teaching and leading the Women and Femme’s aikido class. In December 2021, Paulina demonstrated her dedication to the art by testing for, and attaining the rank of, Shodan. Since then, she has continued to lead classes in person and online as needed.

Back to Albuquerque Iwama Aikido 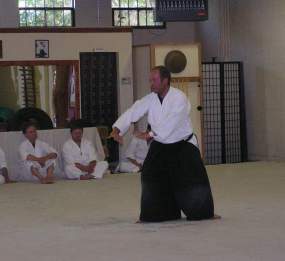 In 1992, in college studying Japanese ceramics, Stein Sensei had his first experience with Aikido. He practiced sporadically for the next ten years. In May 2002, he renewed his commitment to aikido and was introduced to Iwama style Aikido by both Douglas Dale Sensei and Vincent Salvatore Sensei. He spent time traveling back and forth between the two programs.

Upon his return to the USA, he resumed as uchideshi in Reno until 2006. In 2008, he received his Nidan, and in 2013, he established Tucson Desert Aikido in Tucson, AZ. After moving to Albuquerque, New Mexico in 2017, he renamed the school East Mountain Aikido and merged with Albuquerque Iwama Aikido to form Duke City Dojo. In April 2018, he received his Sandan.

Charles Neal was born and raised in Louisiana.  As a young man he studied Hapkido and Tae Kwon Do.  He cross trained in kickboxing, Taiiji Quan, Kung Fu, grappling, and mixed martial arts in Louisiana and New Mexico.

In 2001 Charles began his Aikido training under James Cornfield Sensei at Sandia Budokan.  He holds a Nidan rank from Hombu Dojo, Tokyo, Japan.  In 2015, he began training and functioning as an assistant instructor with Albuquerque Iwama Aikido.